Tom Stolzer, a native Southern Californian, was born in San Diego and grew up in numerous regions of San Diego County. He attended college in San Diego and followed his fiancé Christy to San Francisco where she was getting her Doctorate in Pharmacy. Tom completed his studies at San Francisco State University where he graduated with a B.S. in Biochemistry.

While living in the Bay Area as a starving student, Tom and Christy would drive up to Napa and Sonoma on the weekends to visit wineries. During the mid-90s it was free or very cheap to go wine tasting there and it was a great way to have fun for very little money. In combination with these visits, they visited a small wine shop in San Francisco that held weekly wine tastings of higher end wines, and it is here that Tom fell in love with wine. He briefly considered attending UC Davis for a master’s degree in Viticulture and Enology, but decided it wasn’t a “real” job and moved back to San Diego to get married and start his professional career.

Tom spent the first 19 years of his career as a chemist in the biotech and pharmaceutical industries in analytical chemistry, quality control and quality assurance. Although working at companies developing new medicines for HIV/AIDS and diabetes was very rewarding he became increasingly passionate about wine. Tom sought to experience as many different wines as possible from regions throughout the world, furthered his knowledge of wine by reading about winemaking and the world’s great wines, and gained a strong appreciation for all styles of wine.

Following this long-time passion for wine, and with the urging and support of his wife, Tom left the pharmaceutical industry behind to begin work in Temecula wineries starting at the tail-end of the 2006 harvest, volunteering at Maurice Car’rie. Starting in late 2006, he worked as the Lab Enologist at South Coast Winery where he built on his strong chemistry background and was responsible for all laboratory analysis in the winery and working closely with the winemakers in blending and other fine tuning of the wines. During this time, he finished the Winemaking certificate program through UC Davis. In order to further his knowledge of the world of wines, Tom began to study with the Court of Master Sommeliers and successfully passed the Certified Sommelier exam. Some of the Master Sommeliers in the movie Somm taught the program.

Wishing to gain experience in a different wine region and planning to relocate to the Pacific Northwest, Tom and Christy embarked on a new adventure in Walla Walla, Washington, taking the position of lead Enologist with Dusted Valley Vintners. Dusted Valley Vintners is a small boutique winery that makes high-level wines that regularly receive strong ratings in numerous popular wine publications. Tom gained a lot of new experience and enjoyed making wines in this new and exciting region.

Desperately missing their family, friends, and the spectacular Southern California region and lifestyle, Tom and Christy realized that they needed to come back home. Luckily, a position opened at Thornton Winery where Tom was hired to work beside long-time winemaker David Vergari, who wished to retire. Tom was able to bring prior experience making methode champenoise sparkling wines in Temecula Valley and expand upon it along with the other numerous fine wines at Thornton.

As the Winemaker at Thornton, Tom plans on adding to the history of making great Thornton Temecula Valley wines, with fine methode champenoise sparkling wines, and a range of white, rosé and red wines that showcase the true character of Temecula Valley fruit. His goal is to create wines that are true to their varietal character while showing how the Temecula Valley puts its stamp on the fruit, and assuring the wines are balanced, elegant and most importantly a great match to fine dining. Tom is proud to be a member of the Thornton team and is excited to be back in Temecula Valley where his heart never left.

In his spare time Tom is an avid cyclist, he and his wife Christy love to cook and are addicted to travel (the kids too!). Europe is a favorite destination, but he has been told they’re not going again until his wife finally gets to go to Hawaii! 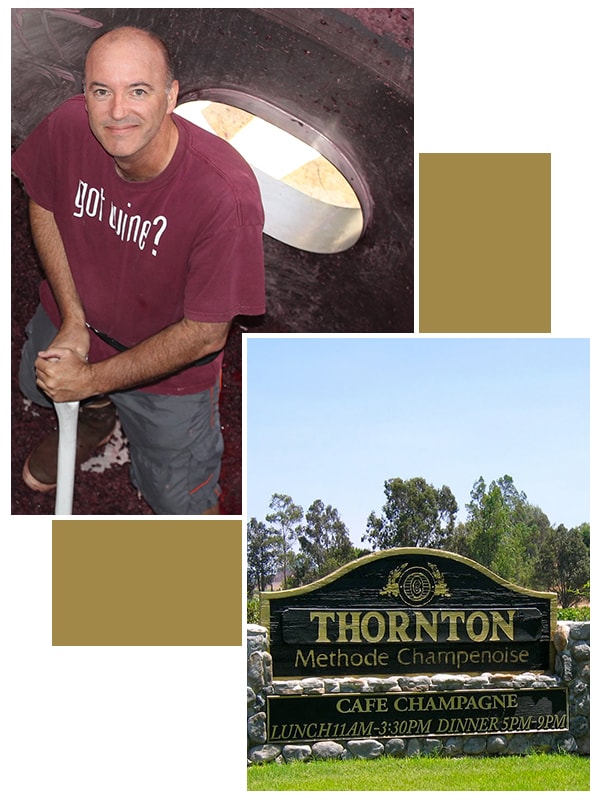 Keep up to date on the latest wine releases, events, and promotions.